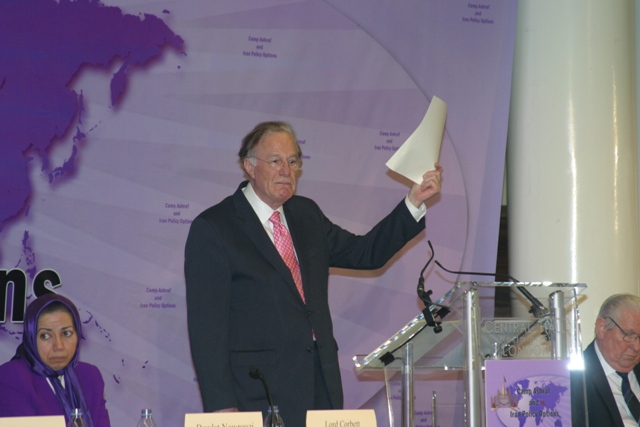 …  Now this storm, this pent up anger is sweeping across North Africa and the rest of the Middle East, and the same is true, the same demands are being made by the pro democracy PMOI refugees in Camp Ashraf in Iraq.

It is precisely because Iran's fundamentalist mullahs fear their voice, that they demand Iraqi thugs in army uniform and it's own agents make repeated attacks on these defenceless refugees in deliberate breach of the undertakings that they have given to ensure the safety and safety and security of these people.  Ashraf sends a powerful unstoppable message for those millions in Iran who cry freedom.  That is why the mullahs try to silence it with 180 loudspeakers night and day spewing out threats to kill residents and destroy where they live.  The voice of Ashraf is for freedom, for democracy, for respect of human rights, an end to corruption, brutality and for jobs and above all for respect.

You will remember in June, July 2009 the thing that most of the protesters of that stolen Presidential election had in the papers they held in their hand was a very simple message; where is my vote?  Where is my vote?  Because clearly it had been stolen.  It is these demands that have led to peaceful change in Tunisia and Egypt. … I said to my wife after Mubarak had decided he wanted a holiday in Sharm el Sheikh, "Wouldn't it look good if the protesters cleared up the square that they had been occupying it"?  And lo and behold they did.  But what a gesture, what that said about them about them claiming back what had been stolen from them.  How are you sleeping, Mr Ahmadinejad?  Do you have sweet dreams in your bed in Tehran, and all of your mates who had been in usurped power in Iran for just about the same period as Mr Mubarak was in Egypt?  You will no doubt be sleeping soundly.  You can turn off foreign TV programs and the internet, but you cannot switch off the contempt of those millions to whom you deny freedom.  The gale of democratic change is coming your way.  No ifs, no buts, not whether, only when.  The gale of democratic change will blow across Iran.  Tanks cannot kill democracy.  Demands can't be hanged.  Torture can't silence those demanding respect for human rights.  The demand for democracy will consign your brutal dictatorship to a dirty stain on the pages of the history book of Iran. 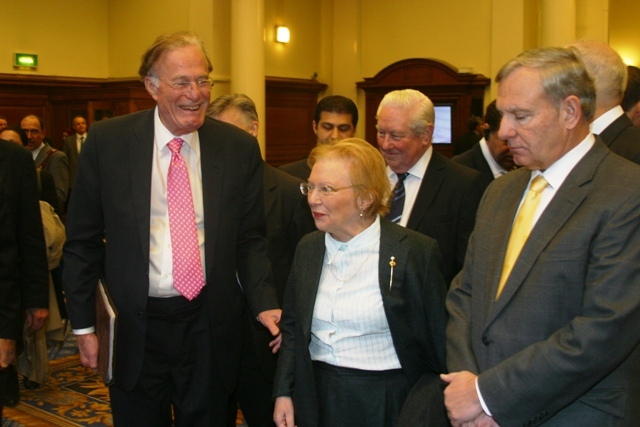 In the UK and US, we must learn swift lessons from the storms swirling around the Middle East.  Both our countries for too long have let Iran's mullahs shape our policies towards them and to the resistance which offers a replacement secular state, respecting human rights and democracy and halts nuclear weapons development.  The challenge for us and the rest of the European Union is to make clear that we stand on the side of those millions in Iran who cry freedom and want change now.  This means that the US should follow our lead in removing the PMOI, the main partner in the coalition resistance, from the list of organisations concerned with terrorism.  That label was only attached here as the price the mullahs demanded for the opening of talks with them about their nuclear weapons program.  …  For seven years, we have sat there ... Seven years, and what has done?  It gave them a licence to both continue and expand their nuclear weapons program.  That is all that did, Mr Straw, while you mislabel the resistance, the real enemies of peace, democracy and stability, the mullahs, are getting on with their ambition to become another country with nuclear weapons.  Can you imagine it?  Can you imagine it?  Nuclear weapons in the hands of that brutal dictatorship, a menace to the people of Iran certainly, and a menace to the rest of the region and the rest of the world.  Here it took an all party group of 35 members of Parliament and the members of the House of Lords, and many of them are here today, to take the British government to court over its refusal to remove the terror tag on the Iranian resistance.  We didn't just win, we won with bells and candles and knobs and banners and flags on.  The court wiped the floor with them.  But they didn't give in.  Oh no, know they took this then to the Court of Appeal who added to their misery and again said shortly to them, "You have ignored the law.  You have asked the wrong questions and that is why you have reached such a perverse conclusion.  Go away, get lost".  And then that famous day in 2008 where both houses of Parliament within minutes of each other unanimously voted to lift the restriction on the PMOI.  That is why we want the same thing done in the United States.  I said in discussion to my American colleagues here, who I am very pleased to welcome, that the same evidence which persuaded our courts to order deproscription is exactly the same kind of evidence, including the security classified evidence, that Secretary of State Clinton has now been ordered by one of your courts to reconsider.  Nothing new, nothing different, because as I understand matters, and you can probably confirm this, our two countries cooperate extensively in matters of security.

At the end of December, some 25 of us in both houses of Parliament wrote to Secretary of State Clinton urging that she delist the PMOI and that there is no relevant reason to continue with the list. …  Of the 25 people who signed this letter was Lord Howe, a former Chancellor of the Exchequer and foreign secretary and deputy prime minister; Lord [Douglas] Hurd, a former foreign secretary    both conservative by the way; Baroness Boothroyd, a former speaker of the House of Commons, Lord Waddington, a former leader of the House of Lords, and the former Home Secretary; Lord Fraser, a former solicitor general, Lord Advocate of Scotland and the deputy leader of the opposition in the House of Lords; my colleague, Lord Archer, solicitor general and member of the Intelligence and Security Committee of the House of Commons; Lord Goldsmith, the Attorney General between 2001 and 2007; Lord Mayhew, Secretary of State for Northern Ireland; Lord Kinnock, former leader of the Labour party, Lord Carlile, who has been the government independent reviewer of terrorism legislation since 2001; Lord Steele, the former leader of the Labour Party; Lord Donaldson; Lord Anderson of Swansea who chaired when he was in the Commons, the home of the House of Commons Select Committee on Foreign Affairs, and Lord McKay former Lord Chancellor. 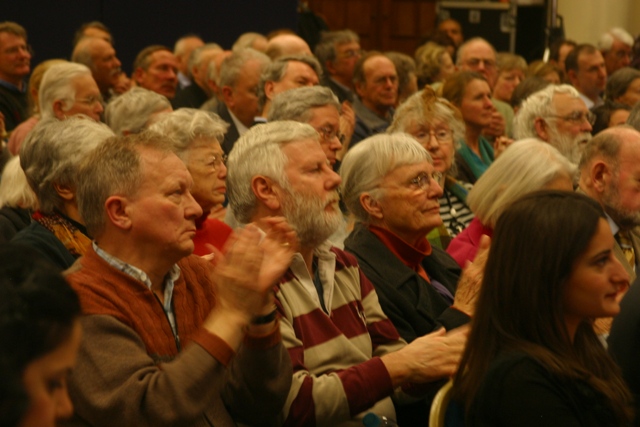 Our choice to stand alongside those demanding democratic change also means we must stand alongside those brave pro democracy refugees at Ashraf, that their voices not be silent or silenced.  The world cannot stand by and watch a massacre, because that is what is promised, threatened to these people in this camp at this time.  The Iraqi government, despite the lies given to the US, UK and other coalition troops to rid their country of dictatorship has shown no intention of honouring its obligations to secure the safety and security of Ashraf residents.  Indeed, in the prime minister's office there has been set up a committee for the suppression of Ashraf.  That is the equivalent of the cabinet office here ... a committee for the suppression Ashraf, which is breaching at a stroke all of the international obligations to which Iraq has signed up to, and specifically a letter to that government, as the Americans handed over responsibility for those in Ashraf in February of 2009.  The Iraqi government wrote back and said, "We understand this and we now undertake fully to comply with these requirements".  Well, the world now knows what that means.  It means that things go from bad to even worse. 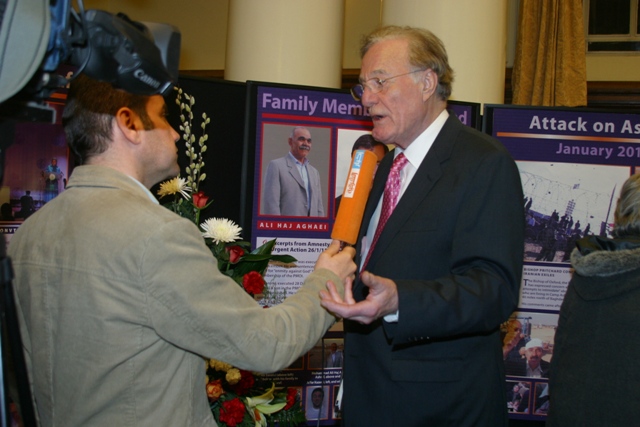 At Ashraf itself there is a hospital built by residents, but now being run by Iraqis.  It must be one of the few in the world which is devoted entirely to denying medical treatment to those in need.  In other words, you don't admit the patients you think you can treat and try to heal, you deliberately deny them that medical assistance, which in breach of all the conventions on human rights law.  On 7 January, and this is the third time this has happened, Iranian agents and uniformed Iraqi thugs hurled bottles and rocks at 176 of them.  If you have seen the videos, all the men and woman have up is their hands.  The hospital refused to treat any of the 176 for the cuts and damages to heads and limbs and the camp's own hospital did what it could to help.  Access to consultants for people with serious medical conditions is regularly denied.  Patients are prevented from seeking medical assistance in Baghdad and elsewhere.  On 8 February, the hospital director refused to allow medicines bought by patients into the camp.  This is all part of the siege of Ashraf and the Iraqis are regularly denying entry for food, fuel and other necessities, as well as visits by the family of residents.  The Iranians last month    you may have read this    actually hanged two fathers who had been to Ashraf to try to visit their sons.  That is what they were charged with, and that is why they were hanged.  This is how the present Iraqi government not just fails to honour it's obligations under international humanitarian law, but shows it has contempt for them.  I say again; is this why troops from many of our countries gave theirs lives to help to put a government like this into office?  I don't think so.  I just don't think so.  Our urgent demand then is that the US through the UN now urgently renews its role of protecting Ashraf residents and ending the siege.  Neither the US for the UK or the rest of the civilised world can stand idly about while these refugees are murdered, injured and removed.  It is this urgent action to prevent a humanitarian catastrophe that we are here to discuss.  Iran will be free. 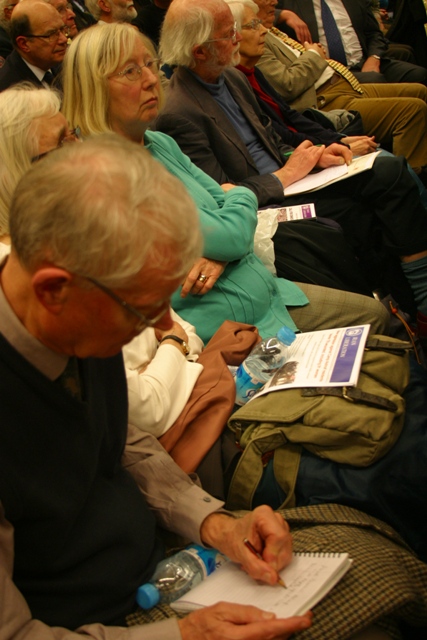