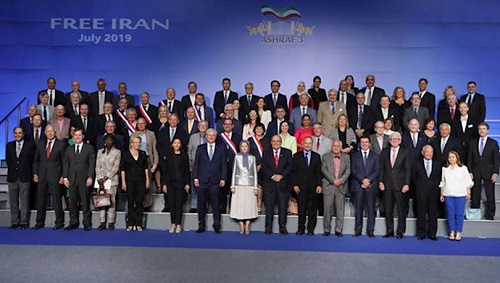 "Iran: The Power of the Alternative" is a Special Report prepared by The Washington Times Special Sections Department.

The Washington Times had a report about the annual gathering of Iranian in exile, which took place at Ashraf 3 in Albania, organised by the Iran’s largest opposition group.

Ashraf 3 is the city built by more than 3,000 Iranian dissidents who used to be in Iraq.

In this report you can read: “Under the plan, Maryam Rajavi would step in as president-elect until elections are held. Mrs. Rajavi — the wife of MEK co-founder Massoud Rajavi, who disappeared in 2003 — was the star of Saturday’s event. Her remarks were interrupted repeatedly by loud chants of “Iran! Maryam! Freedom!” and “From Ashraf to Tehran, we will fight to the end!”

It continues: “MEK does not formally take sides in internal politics in other countries, and the delegation from the United States included figures from across the political spectrum. But in her opening remarks, Mrs. Rajavi appeared to endorse President Trump, who helped raise MEK’s profile after pulling out of the Irannuclear deal last year.”

To read more, you can follow the link below: Iran: The Power of the Alternative