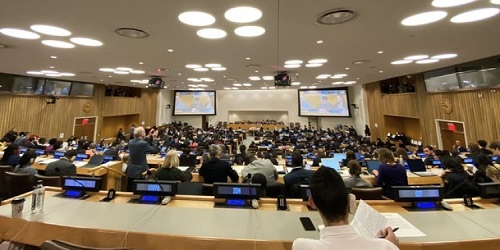 The Third Committee resolution was passed by 79 votes in favor, 32 against and 64 abstentions.

The resolution expressed serious concern at the “alarmingly high frequency of the imposition and carrying-out of the death penalty by the Islamic Republic of Iran, in violation of its international obligations, including executions undertaken against persons on the basis of forced confessions or for crimes that do not qualify as the most serious crimes, including crimes that are overly broad or vaguely defined, in violation of the International Covenant on Civil and Political Rights, expresses concern at the continuing disregard for internationally recognized safeguards, including executions undertaken without prior notification of the prisoner’s family members or legal counsel, as required by Iranian law, and calls upon the Government of the Islamic Republic of Iran to abolish, in law and in practice, public executions, which are contrary to the 2008 directive seeking to end this practice issued by the former head of the judiciary, and to consider establishing a moratorium on executions.”

The Third Committee resolution also expressed serious concern at the continued imposition of the death penalty by the Islamic Republic of Iran against minors, and urged the Islamic Republic of Iran to cease the imposition of the death penalty against minors, including persons who at the time of their offence were under the age of 18, in violation of the Convention on the Rights of the Child, and to commute the sentences for child offenders on death row.

The resolution called on the Iranian regime to ensure, in law and in practice, that no one is subjected to torture or other cruel, inhuman or degrading treatment or punishment, which may include sexual violence, and punishments that are grossly disproportionate to the nature of the offence, in conformity with amendments to the Penal Code, the constitutional guarantees of the Islamic Republic of Iran and international obligations and standards, including but not limited to the United

Nations Standard Minimum Rules for the Treatment of Prisoners (the Nelson Mandela Rules), and to ensure that allegations of torture are promptly and impartially
investigated.

The Third Committee resolution urged the Islamic Republic of Iran to cease the widespread and systematic use of arbitrary arrests and detention and also called on the regime to release persons detained for the exercise of their human rights and fundamental freedoms, including those who have been detained solely for taking part in peaceful protests, including the nationwide protests of November 2019 and January 2020, to uphold the human rights of those involved in peaceful protests, to consider rescinding unduly harsh sentences, including those involving the death penalty and long-term internal exile, and to end reprisals against human rights defenders, peaceful protesters and their families, journalists and media workers covering the protests, and individuals who cooperate or attempt to cooperate with the United Nations human rights mechanisms.