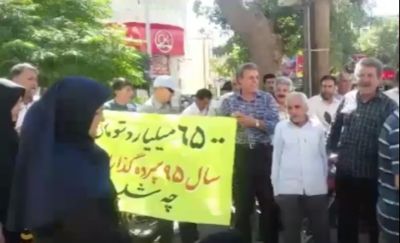 Hundreds of people who have not been able to withdraw their deposits from Caspian credit institution staged a protest gathering outside the regime’s judiciary office in the capital, Tehran, chanting angry slogans, on Sunday, August 20.

The protesters were shouting “Death to Seif”, referring to the Central Bank governor, Valiollah Seif.

During recent months, there have been many similar protests against Caspian credit institution in other cities, as well.

On Sunday, protestors also gathered outside a branch of the institution in city of Neyshabur in north-eastern Iran.

There are hundreds of similar funds are active across Iran but the regime has failed to regulate them.

The foremost demand of the protesters is to take back their money siphoned off by the IRGC-aligned institution.

Many people across the country had trusted Caspian credit institution enough to decide to invest there, as its name had been listed in Central Bank’s official website as an authorized institution. Therefore, investors say that they can no longer trust the Central Bank.