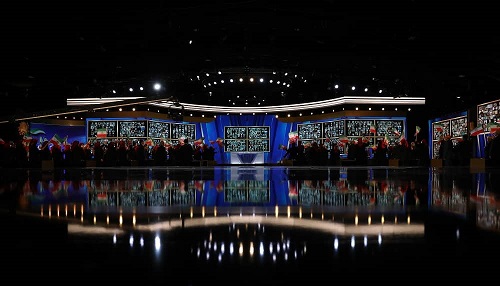 On Saturday, Sunday, and Monday, hundreds of thousands of Iranian expatriates in 105 different countries tuned in to a series of live-streamed speeches by high-profile politicians, freedom-loving people, and the supporters of the National Council of Resistance of Iran (NCRI). During the three-day Free Iran World Summit over 1,000 political dignitaries took part in the event as members of delegations representing the United States, United Kingdom, European Union, the Arab world, and beyond.

The keynote speaker of all three events was Mrs. Maryam Rajavi, the NCRI’s president-elect. On Saturday, those remarks largely focused on Iran’s domestic affairs and the perceived vulnerability of the clerical regime, but also touched upon the international community’s inaction vis-à-vis the ongoing human rights violations in Iran and export of terrorism abroad.

“The Western countries’ interactions with the mullahs’ regime have fed a vicious cycle of deception and appeasement,” Mrs. Rajavi said on Sunday, referring to the failed appeasement policy of those countries in dealing with the mullahs’ regime. The 2015 Iran nuclear deal, or Joint Comprehensive Plan of Action, is a prime example of that failed strategy, in that it gave away large-scale relief from economic sanctions in exchange for only limited restrictions on the regime’s nuclear program, with additional limitations on international enforcement mechanisms.
The Iranian regime never abided by its commitments under the terms of the JCPOA. In addition, the regime began a nuclear extortion plan by explicitly violating the deal, when in 2018 the US declared Iran to be out of compliance and halted American participation in it.
Since April, negotiations have been ongoing in Vienna with the aim of restoring the JCPOA and bringing the US back into the fold under its new administration. But there has been little to no apparent progress in that effort, and speculation abounds as to whether the existing deal will have to be abandoned and the process started over.
This weekend’s summit suggests that there is ample international support for that prospect. Many of the relevant speeches also highlighted changing circumstances inside Iran which could have a substantial impact on Western foreign policy decisions.
Mrs. Rajavi specifically recommended on Sunday that the lawmakers involved in those decisions should approach any new negotiations framework with the understanding that “the mullahs only understand the language of firmness and strength.”
In the interest of conveying that language, Mrs. Rajavi further underlined those Western powers aspire to “completely close down the regime’s bomb-making, enrichment and nuclear facilities,” “oblige the clerical regime to withdraw the Revolutionary Guard Corps (IRGC) from Iraq, Syria, Yemen, Afghanistan, and Lebanon,” and “oblige the mullahs to stop torturing and executing Iranians.”