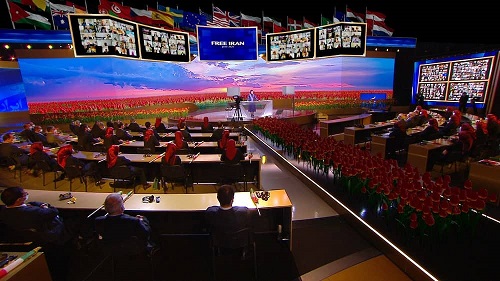 Monday marks the conclusion of the three-day Free Iran 2021 world summit organized by the Iranian resistance for the purpose of promoting more assertive policies toward the Iranian regime and demonstrating the prospect for regime change to be brought about by the country’s domestic population.

President-elect Mrs. Maryam Rajavi used her keynote speech on Saturday to highlight the theocratic regime’s apparent fear of escalating protest movements and to call on Western powers for a firm policy towards the Iranian regime. In her follow-up remarks on Sunday, she gave voice to more specific criticisms of existing Western policies, especially in the wake of the 2015 Iran nuclear deal.

As Mrs. Rajavi described the situation, those revelations, including the location of the regime’s fortified nuclear facility at Fordo, have presented a crucial challenge to Tehran’s persistent strategy of “hiding its nuclear program” and “deceiving the world” while also courting Western efforts to “stop or curb this project by granting concessions or by showing complacency.”

In the weeks leading up to the Free Iran World Summit, new dimensions of the regime’s commitment to its strategy of obstruction were revealed to the world. The latest report on the status of the 2015 agreement, or Joint Comprehensive Plan of Action, revealed that nuclear inspectors from the United Nations have not only been preventing from observing video surveillance of declared nuclear sites but have also been deprived of access to various pieces of data monitoring equipment which previously allowed for continuous monitoring of the growth of nuclear stockpiles whose existence Tehran had acknowledged.

This obstructionism had apparently been ongoing under the terms of a temporary agreement between Tehran and the International Atomic Energy Agency, which prevented inspectors from being kicked out of the country altogether in February when an Iranian law took effect requiring an increase in the nuclear activity unless US sanctions had been suspended before then. Now even that agreement has been suspended, with Tehran declining to extend it but also refusing to clarify whether monitors will be allowed to remain in the country or be given access to any information whatsoever.