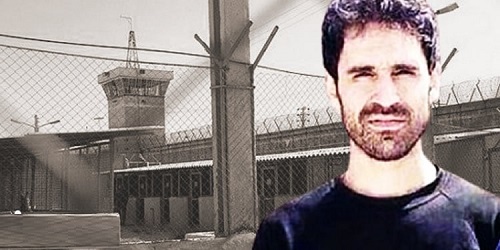 Iranian authorities have threatened political prisoner Vahid Afkari, brother to executed wrestling champion Navid Afkari, that if he does not “confess” he will be killed.
According to reports, two high-ranking officials met with Vahid Afkari and told him that he should do whatever they asked of him, including confessing to the murder, in order to be released, otherwise he would be executed.
About a month after Navid’s execution, prison officials told political prisoner Vahid Afkari that two high-ranking officials wanted to meet with him. The source said that during the meeting, Vahid Afkari was asked to do whatever they asked him to do, including confessing to a crime or murder, so that he could be released from prison after a year and they would provide living conditions inside or outside the country for him.
They had threatened political prisoner Vahid Afkari that if this request was not accepted, he would also be “executed”.

In a voice recording released in early September 2020 from inside prison Vahid Afkari said: “To show they provide security, they arrest innocent people without evidence, and put them on trial without any evidence, sentencing them and taking their lives away. Even worse, they execute them. As a person in the 21st century, with all these advances in culture and civilization, I am not sure how I should defend myself and how I should tell others to help me. I have no other way than logic and law. I have no other way. Iranians, I am innocent.”

Iranian wrestling champion Navid Afkari was executed in September 2020 for allegedly killing a security man in Shiraz, Fars Province at the time of the summer 2018 protests in the province, despite evidence that he did not commit the alleged crime and that he was tortured during interrogation into giving a false “confession.”

Vahid and Habib, the wrestler’s brothers, were sentenced to 54 years and 27 years in prison, respectively, on similar charges. The Afkari brothers, meanwhile, have repeatedly denied the allegations, particularly the murder of a security official, saying they were forced to make false confessions under severe pressure and torture.

Just days before the execution of wrestling champion Navid Afkari in September 2020, the three brothers were taken to solitary confinement and severely beaten.

They made a complaint about the beating that time in the presence of the Chief Justice of Fars Province and individuals allegedly sent to prison by a coroner’s office.

In this case file, the signs of injuries on the body of the Afkari brothers – including 15 signs on Navid’s body, six signs for Habib, and four signs for Vahid – were recorded.

After at least seven months, while their lawyer did not have access to the case, a hearing was held on the Afkari brothers’ case.
Saeed Afkari, the brother of Navid, Vahid and Habib, tweeted on April 22 about his “brothers’ complaint against solitary confinement, beatings, and also the threat of murder by two high-ranking officials of the Iranian regime.”

He said that “After 228 days, an informal interrogation session was held only in Vahid’s presence. The interrogator did not give permission to access the file, to the video of the beatings, to the medical jurisprudence report of the injuries, and the solitary confinement still continues.”

Navid Afkari had filed a complaint with the judiciary on September 13, 2019, detailing how he was forced to give false confessions while being subjected to “the most severe physical and psychological torture” during nearly 50 days in police detention.
In an audio file shared on August 30, 2020, Navid is heard saying that the Medical Examiner’s Office in Shiraz carried out an examination of his injuries that were caused under torture.

“The evidence is there if the court wants to investigate (the acts of torture) … There is not one shred of evidence in this damned case that shows I’m guilty. But they don’t want to listen to us. I realized they are looking for a neck for their rope,” Navid said.

In a video message on August 30, 2020, the mother of the Afkari brothers, Behieh Namjoo, said: “Vahid has been under so much physical and psychological torture that he attempted suicide three times… to force him to implicate Navid.”

She added: “They held an unjust and false trial where my children were not able to defend themselves and sentenced them without evidence of any crime…

“I call upon the people of the world and the people of Iran and anyone who can hear me to help (fight) the unjust sentences against my sons.”
In another audio file shared on August 31, 2020, Navid’s brother Vahid also talks about being tortured and threatened during interrogation:
“I was in a coma in the Namazi Hospital (in Shiraz) for three days and no one could hear me. Then they tortured me and put a plastic bag over my head. They beat me with chains for hours and struck the bottom of my feet with a baton. They would pee on the floor and force me to walk on it. They threatened to arrest my mother and sister.”

Vahid continued: “From the very beginning the victims’ parents denied knowing us. I told the judge to present a witness. If there’s proof of my presence on my phone or on a camera footage, show it. If a murder weapon has been uncovered at our home, show it… when I said these things the judge only laughed and made fun of us.”