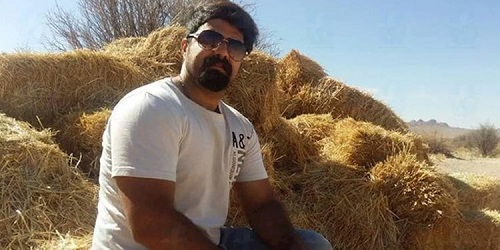 Behnam Mahjoubi, from Iran’s persecuted Gonabadi Dervish religious minority, passed away today in a hospital in Tehran four days after receiving an of unknown medication in prison.
Mahjoubi was transferred to Loghman Hospital on February 12 from the notorious Evin Prison.
Ebrahim Allah Bakhshi, the friend of dissident Behnam Mahjoubi, cited “credible hospital sources” as saying Behman Mahjoubi had passed away.
“Credible sources from among hospital authorities have informed us that Behnman Mahjoubi has passed away but (the doctors said) they have ordered us to keep him connected to the machines for three days to keep up appearances,” he tweeted today.

Allah Bakhshi, a former political prisoner, and Mahjoubi both are members of Iran’s Gonabadi Dervish religious minority. Members of the Sufi religious sect long have complained of harassment by the Iranian regime, who view them as heretics.
Last night, doctors had told the family that he was only breathing with the machines and that the hospital staff have done their best and it would take a miracle to get Behnam back.

A source close to the family said before this that Behnam Mahjoubi was taken to the prison infirmary on Friday night and was given “sleeping pills” because there was no doctor on shift. His health deteriorated after taking the pills and he went into a coma.

His mother Batoul Hosseini said from outside Loghman Hospital that she was not allowed to see her son.

Behnam Mahjoubi suffered from a panic disorder and was subjected to torture and other ill-treatment, including through the denial of specialist medical care. He was serving his two-year prison sentence for attending a peaceful protest.

Evin authorities had been blocking Mahjoubi’s access to panic disorder medications provided by family members since August 2020. Mahjoubi went on a 10-day hunger strike that month to protest the denial of the medication. He began suffering coronavirus symptoms while on the hunger strike.
Prison authorities in September 2020, forcibly sent the 33-year-old political prisoner to a psychiatric clinic after prison interference with his medical treatment led to his partial paralysis.

Mahjoubi was among more than 300 Dervish community members arrested in April 2018 in connection with peaceful protests that took place in February 2018 by Gonabadi Dervishes in Tehran, which were violently quashed by security forces and resulted in the arrest of hundreds of men and women.

Following his arrest by around 20 plainclothes security agents, he was beaten, held in solitary confinement with lights on for 24 hours a day, and interrogated without a lawyer present. His interrogators forced him to sign “confessions”.

Mahjoubi was released on bail later that year while also being sentenced to two years in prison on the charge of “assembly and collusion against national security.” He was summoned to begin serving his prison sentence on June 20, 2020.