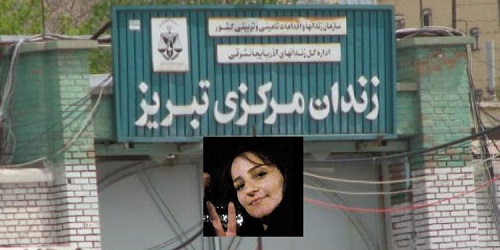 Political prisoner Massoumeh Senobari is suspected of cancer. The authorities of the Prison of Tabriz, however, are preventing her dispatch to a hospital for diagnosis and treatment.

The family of Massoumeh Senobari have been following up on her treatment and medical tests and have accepted to pay for her treatment, but prison authorities have prevented her from doing her sonogram test and overlooked her visits to the prison dispensary requesting dispatch to civic medical centers.

Massoumeh Senobari is not the only prisoner who is denied medical treatment. Another inmate detained on ordinary charges has been having chills and fever for one month and is in dire conditions. But the nurse visiting the ward has given her tranquilizers and sent her back to the ward every time.

Last October, Massoumeh Senobari had contracted the Coronavirus but was deprived of medical treatment and proper food.

Political prisoner Massoumeh Senobari is sentenced to a total of eight years in prison. One year for “propaganda against the state,” five years for alleged “membership in the People’s Mojahedin Organization of Iran,” and two years for “insulting Khamenei.”

Massoumeh Senobari, born in 1988, is married with one child and lives in Tabriz.

She was arrested on March 6, 2019 and taken to the detention center of the Department of Intelligence of Tabriz. On the same night, security forces raided her house, damaging and confiscating her personal belongings.

In the detention center, she was tortured under interrogation so much that she could no longer walk. The blows of whip to her legs and feet cracked her bone which has not healed, yet. Also, because of blows to her head, her vision became blurry.