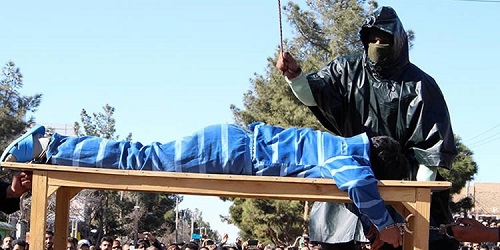 The public flogging sentences for two men were carried out today in the city of Golbahar in northeast Iran.

A Judicial Official in the province announced the public punishment saying that the flogging sentences of two young men convicted of theft were carried out in public in the city of Golbahar.

In his comments carried by the state-run media, Golbahar Public and Revolutionary Prosecutor said that the men were eached flogged 74 times.
Golbahar is located 35 km northwest of Mashhad.

The four prisoners, all under 30 years of age, were flogged on Wednesday October 21. Two of the prisoners were identified as Behrouz Momeni and Mohsen Torkashvand who were accused of theft and sentenced to flogging. It is not clear why the other two prisoners were lashed.

More than 100 “offences” are punishable by flogging under Iranian law. The offences include theft, assault, vandalism, defamation and fraud. They also cover acts that should not be criminalized, such as adultery, intimate relationships between unmarried men and women, “breach of public morals” and consensual same-sex sexual relations.

The regime regularly hands out flogging sentences to protesters, dissidents, and to those charged with adultery and theft, among other things. Flogging is a cruel and degrading punishment and is tantamount to torture.