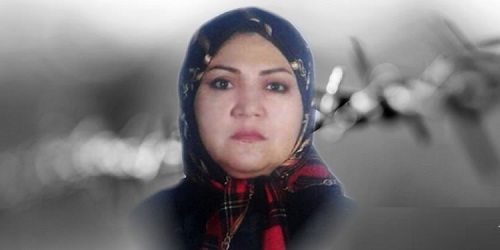 Reports say the health of political prisoner Fatemeh Mosanna held at women’s ward of Evin Prison is deteriorating and the authorities have deprived her of adequate medical treatment.

Fatemeh Mosana’s health condition deteriorated on October 17 due to an intestinal infection she developed from prison conditions.

The prison’s doctors have said that they cannot do anything to treat her in prison and that she must be taken to a hospital outside prison.

However, the prison authorities do not take the necessary measures to treat her and refuse to send Fatemeh Mosanna to the hospital.

The political prisoner lost her consciousness on August 19, in the women’s ward of the notorious Evin Prison. She was transferred out to Tehran’s Taleghani Hospital where her limbs were cuffed to the bed throughout her stay. She was deprived of visiting her relatives while in hospital.

Ms. Mosannad was returned to the quarantine ward of Evin Prison a few days later without her treatment being completed. Her doctor had opposed her return because her test results were not ready yet and her treatment was incomplete.

Ms. Mosanna had been granted leave on bail on March 31, 2020 because of her health conditions. However, agents of the Prosecutor’s Office went to her home without prior notice on May 6, 2020, handcuffed and violently took her back to Evin Prison in front of her children.

Since 2015, Fatemeh Mosanna and her husband Hassan Sadeghi have been serving 15-year prison sentences after being arrested in January 2013 for organizing a mourning ceremony for Hassan Sadeghi’s father, a member of the People’s Mojahedin Organization of Iran (PMOI/MEK).

The Iranian regime has confiscated all of the couple’s properties, including what Hassan Sadeghi had inherited from his father.

Prior to her current incarceration, Fatemeh Mosanna and her mother Ferdows Mahboubi served two and four years in prison respectively in the 1980s.
Fatemeh’s brothers, Ali, Mostafa and Morteza Mosanna were executed, all for the charge of supporting the PMOI.

Thousands of political prisoners with were executed without trial during the 1980s as the Iranian regime worked to eliminate the Iranian resistance. At least 30,000 political prisoners were summarily and extra-judicially executed in the summer of 1988 alone. The 1988 massacre was carried out on the basis of a fatwa by the regime’s then-Supreme Leader Ruhollah Khomeini.