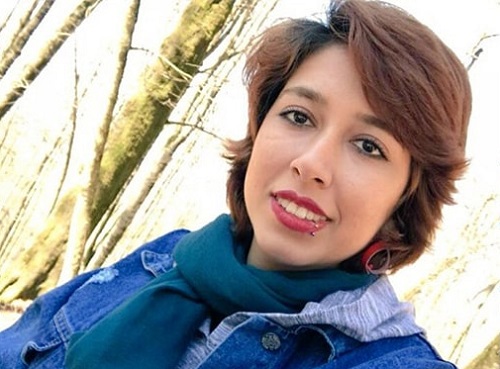 Saba Kord Afshari was transferred to Tehran’s Taleghani Hospital on Saturday, September 19, 2020, as her health badly deteriorated in the women’s ward of Evin.

Political prisoners Saba Kord Afshari suffers from GI complications and stomach ulcer. Her health condition badly deteriorated on Saturday, September 19. So, she was sent to Taleghani Hospital in Tehran to undergo ultrasound, colonoscopy, and endoscopy. But she was returned to prison after doing just the sonography.

The excuse used to return Ms. Kord Afshari back to prison, was that she did not have the money to pay for the expenses.

Her family had been wrongly told to go to another hospital, Shohaday-e Tajrish, to pay for the expenses but she was taken to Taleghani Hospital.

Based on the bylaws of the Organization of Prisons, the expenses for medical treatment of prisoners must be paid by this organization.

Saba Kord Afshari was first arrested in August 2018 during the protests in Tehran against high prices. She was released from Evin Prison in February 2019. She was re-arrested on June 1, 2019 and sent to Qarchak Prison after 11 days of interrogation.

Political prisoner Saba Kord Afshari has been serving her sentence in the women’s ward of Evin Prison since August 13, 2019.

Saba Kord Afshari is presently sentenced to 9 years in prison on charges of “propaganda against the state” and “assembly and collusion intended to commit crime against national security.”

She faces another 15 years on the charge of “spreading corruption and prostitution by removing the veil and walking without the veil.”

Political prisoner Saba Kord Afshari was born on July 7, 1988. Her mother, Raheleh Ahmadi, is also imprisoned along with her for following up on her case and defending her rights.