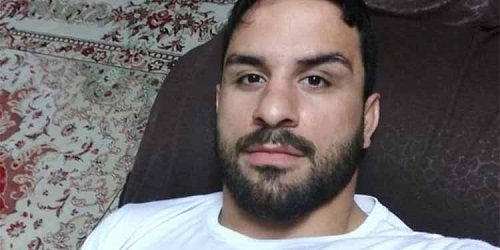 Navid Afkari was executed this morning in Adelabad Prison of Shiraz.
His family were told that he had been hanged.

Despite widespread international outcries in Iran and around the world to stop his execution, the Iranian regime hanged the young Iran protester in a bid to prevent further protests against the regime.

Navid Afkari, 27, was a wrestling champion who had never hurt anybody.

He was arrested on September 17, 2018 and accused of killing a Basij agent Hasan Turkman during the August 2018 protests in Shiraz.
Navid filed a complaint with the judiciary on September 13, 2019, detailing how he was forced to give false confessions while being subjected to “the most severe physical and psychological torture” during nearly 50 days in police detention.

“They put a plastic bag over my head and almost suffocated me. Using batons and other hard objects, they beat hard on my hands, abdomen, and legs. They used foul language and insulted me frequently. They tied me tight and poured alcohol down my nostrils,” Navid Afkari wrote in an open letter from detention.

In an audio file shared on August 30, 2020, Navid is heard saying that the Coroner’s Office in Shiraz carried out an examination of his injuries that were caused under torture.
“The evidence is there if the court wants to investigate [the acts of torture] … There is not one shred of evidence in this damned case that shows I am guilty. But they did not want to hear our voice. Then, I learned that they are looking for another head to hang from their noose,” Navid said.