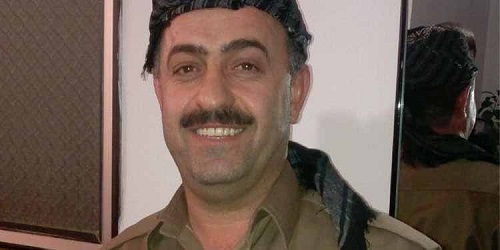 The dossier has been transferred to the Prosecutor’s Office in the city of Sanandaj, capital of Kurdistan province, for the execution to be carried out.
Heydar Ghorbani, a member of the Kurdish minority community, along with his brother-in-law Mahmoud Sadeqi, were arrested by agents of the Ministry of Intelligence and Security (MOIS) back in 2016 and immediately transferred to Sanandaj Central Prison.
They were accused of cooperation in the killing of several members of the Revolutionary Guard and membership in the outlawed Democratic Party of Iranian Kurdistan (DPIK).

According to his family, Heydar Ghorbani was forced to confess under duress and psychological torture.
His forced confessions were later broadcasted on the English channel of the Iranian state-run television, Press TV in 2017.
The Iranian regime has increased its use of the death penalty against the dissidents and political prisoners to contain the widespread surging social discontent.
On Wednesday, August 5, Iranian regime hanged political prisoner Mostafa Salehi, arrested during the December 2017 protests. He was charged with killing a member of the Islamic Revolutionary Guards Corps during protests. Mostafa Salehi maintained his innocence until his execution. “Bring witnesses or at least check security cameras,” he had told the court.
Despite facing persistent pressure and enduring long periods of torture while he was held at the Isfahan Police Department, during interrogations by the Isfahan Intelligence Agency, Salehi refused to confess, as the Najafabad (Isfahan) prosecutor later confirmed. No weapons, ammunition, or other evidence were found. He pleaded not guilty in court.
In a statement on July 15 following the execution of two Kurdish men, Diaku Rasoulzadeh and Saber Sheikh Abdollah, Amnesty International said “There has been an alarming escalation in use of the death penalty against protesters, dissidents and members of minority groups in Iran.”
The rights group said that at least five prisoners from Iran’s Kurdish minority, including Heydar Ghorbani, were at risk of execution.
According to Amnesty another Kurdish prisoner on death row, Hedayat Abdollahpour, has been forcibly disappeared since May 9, 2020 as the authorities refuse to reveal the truth concerning his secret execution and return his body to his family.
A seventh Kurdish prisoner, Mostafa Salimi was executed on April 11, 2020 in the city of Saqqez, in Kurdistan province. Salimi had managed to escape in late March along with tens of other inmates during a protest by inmates against prison conditions amid the coronavirus outbreak. He was executed shortly after being re-arrested.
“Iran’s increasing use of the death penalty as a political weapon for repression is alarming and warrants the immediate attention of the international community. Without urgent diplomatic and public action, more lives in Iran are at risk of being cut short by the state’s execution machine,” said Diana Eltahawy, Amnesty International’s researcher on Iran.