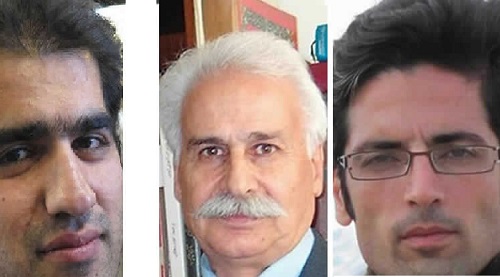 Three Iranian political prisoners face new charges that could keep them in prison for a longer-term.

Majid Assadi, Mohammad Bannazadeh Amirkhizi and Payam Shakiba imprisoned at Rajai Shahr Prison of Karaj were summoned to the Evin prison prosecutor’s office today and were told that new charges had been brought against them while they were in prison.

The three political prisoners have been charged with “propaganda activities against the regime” and returned to prison.

Majid Asadi had already been acquitted of the charges in the same branch on July 8, though it seems that this case was reopened on July 16 after the Intelligence Ministry pressured the court.

The three Iranian political prisoners were arrested by Intelligence Ministry agents in 2017 and held in solitary confinement in Tehran’s Evin Prison for about two months before being transferred to Rajai Shahr Prison, located 31 miles west of the capital.

Majid Assadi was first arrested on July 3, 2008, for his peaceful political activities while he was a student at Allameh Tabatabaie University in Tehran. In March 2010, he was sentenced to four years in prison for “assembly and collusion against national security” and was released after serving his sentence from October 2011 to June 2015. He was arrested again by Intelligence Ministry agents on February 18, 2017. On November 27, 2017, Branch 26 of the Tehran Revolutionary Court sentenced him to six years in prison and two years in exile in Borazjan, Bushehr Province for “propaganda against the state” and “assembly and collusion against national security.”

Payam Shakiba had been previously arrested on July 8, 2008, for exposing sexual misconduct against a female student by a senior administrator at the Zanjan University campus, where he was a student at the time. In March 2010, Shakiba was sentenced to one year in prison for “causing public anxiety” and “instigating illegal gatherings against national security” and barred from returning to university for two semesters. Upon appeal, his sentence was reduced to six months in prison, which he served from November 2010 to March 2011.

Mohammad Banazadeh Amirkhizi, 74, was first arrested in 2009 and charged with having ties to the People’s Mojahedin Organization of Iran (PMOI/MEK). He was released in 2014, after spending five years behind bars. He was arrested again in February 2016 and was tried in November 2017. A Revolutionary Court presided by Judge Ahmadzadeh sentenced him to 11 years in prison and two years of exile to the city of Nikshahr in Sisatan and Balouchestan, southeastern Iran. The sentence was upheld in the appeals court in July 2018.