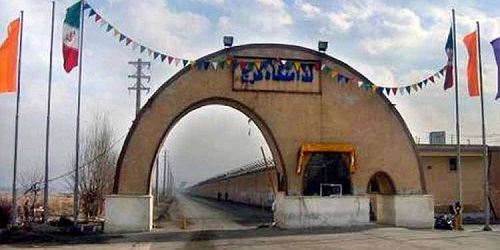 A catastrophe is in the making in the Central Prison of Karaj, according to reports from this prison. The inmates have appealed to the international community to take urgent action to save their lives.

Some 600 prisoners detained in a ward called “Souleh” in the Central Prison of Karaj are held under catastrophic conditions susceptible to infection with the coronavirus.
Souleh used to be the prison’s workshop which has now turned into the quarantine ward. The ward, 2500 sq. meters holds new arrivals and inmates returning from furlough.

All prison leaves expired on May 20 and the inmates who had received prison leaves returned to prison. A number of old prisoners are also held in this ward. Therefore, a large number of inmates are definitely infected.
On Saturday, May 23, a few days after the return of inmates who had been given furloughs, only 100 inmates in this ward were tested for the virus. Several inmates who tested positive were transferred out and taken to an undisclosed location. Other inmates will have to wait to be tested later.
A reliable source said: “Instead of keeping out the prisoners who were on furlough to prevent further spread of the virus, the Prosecutor of Karaj is arresting them and returning them to different wards. It is said that between 300 and 400 inmates are supposed to be added to the Souleh.”
The source said, “The inmates are confused and under stress. They say they do not fear death. What is difficult for them is to die due to chaos and mismanagement. It is not clear who is sick in this ward and who is not.”
The water and sewage system in the ward is not sufficient for this number of people. The toilets are usually clogged and evacuated by pumps. The nasty odor of sewage has made the ward’s atmosphere intolerable.
On the other hand, the majority of new arrivals in this ward are addicted who do not have drugs. Their harrowing screams are yet another factor which makes the ward intolerable.
The detainees of the Central Prison of Karaj urge international organizations and all their compatriots to take action to save their lives.