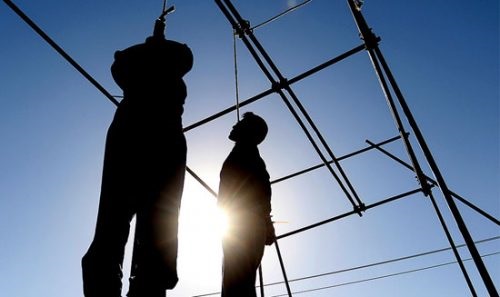 Iranian authorities have executed at least 11 prisoners in the past two days in Raja’i Shahr, Kermanshah, Sanandaj, Dastgerd prisons.
Seven prisoners were hanged On Wednesday, April 22, in Raja’i Shahr Prison in Karaj, near the capital Tehran.

All of them were taken to solitary confinement on Sunday. Six of the victims are identified as, Mohsen Rezaian, Alireza Aryaei, Hamidreza Asgharpour, Mostafa Ghiasvand, Mehdi Asemi and Anna Dordi Babaei.

Babaei had been incarcerated since the early 1990s.

Loqman Ahmadpour, 30, was executed Wenesday in Sanandaj Central Prison. All of the victims were convicted of murder.

On the same day, Another inmates Ali Sheikhani charged with rape was hanged in Dastgerd Prison on Isfahan, central Iran.

Shayan Saeedpour, who was 17 years old at the time of his conviction, was hanged on Tuesday, April 21. Saeedpour was convicted of murder and sentenced to death in October 2018. Iran’s Supreme Court upheld the death sentence in 2019.

He managed to escape the prison during a protest against prison conditions on March 27 amid the coronavirus outbreak but was arrested by security forces.
In its 2019 global review of the death penalty Amnesty International said, “Iran retained its place as the world’s second most prolific executioner after China, where the exact number of people put to death remains a state secret.”

Amnesty International underscored that Iran was among the countries which “continued to hide the full extent of their use of the death penalty by restricting access to death penalty information.”

Iranian regime officials have never heeded to the International community’s calls to abolish the death penalty.

Not only Iran is the leading state in executions per capita, but it also tops the charts in the number of executions of minors and juvenile offenders.
According to the registered tally by Iran HRM, the Iranian regime executed 273 persons in 2019, including 16 women and 9 juveniles.