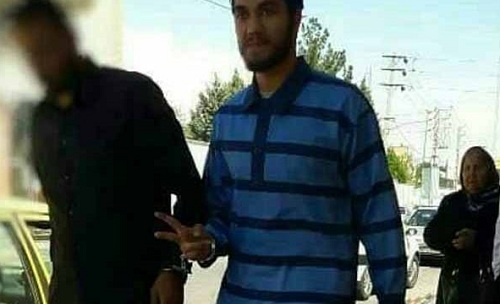 The 23 year old economy student has been serving a three-year sentence on the charges of “insulting officials and agents” and “spreading propaganda against the regime.”

Mehrdad Mohammadnejad was detained due to his activities on social media.

According to an informed source, Mehrdad is professional boxer. He went to university three times a week and spent the rest of his week working as a delivery boy for a restaurant in Tehran to make money for his tuition.

He was arrested on 21 October, 2018 after agents of the intelligence agency raided his home in Shahriar, western Tehran.

The agents came to his home in four cars and severely beat Mehrdad Mohammadnejad before detaining him. They also confiscated his tablets, cellphones, books and documents.

On the day of his arrest, Mehrdad Mohammadnejad was to go to the restaurant at 12 pm. His mother asked him not to leave the house until then, so she could pick up his younger brother from school. When his mother got back, her home was ransacked and Mehrdad was nowhere to be found.

His family did not know his whereabouts for a few days until Mehrdad called his elder brother and said that he was taken to Tehran’s notorious Evin Prison by the intelligence agency.

Tehran’s Revolutionary Court sentenced Mehrdad Mohammadnejad to two years in prison for “insulting officials and agents” and one year in prison for “spreading propaganda against the regime.”

In September 2019, the branch 36 of Tehran’s appeals court headed by judge Ahmad Zargar confirmed the sentence.

Mehrdad Mohammadnejad would have to serve two years behind bars according to Article 134 of the Islamic Penal Code, which allows defendants to serve only the longest sentence in cases involving multiple convictions.