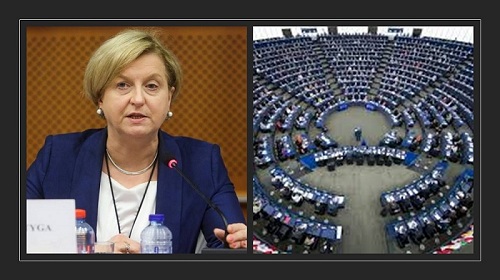 Members of the European Parliament will debate the draft resolution on Wednesday and hold a vote on Thursday in Strasbourg, France.
"We already know that around 1,500 people have been killed in Iran during the recent crackdown," said Ms. Fotyga, a member of the Parliament’s Foreign Affairs Committee and a former Foreign Minister of Poland.

"Despite difficulties, opposition protesters, including minors, are meticulously trying to put names to those who perished during the demonstrations and protests," she told the Parliament’s plenary.

"Our voice, raised in a timely manner to defend the protesting Iranians, is a matter of life or death for many who are imprisoned and still suffering insecurity."

"I kindly ask you to give your consent to this item," said the Polish MEP.

At least 1500 protesters are confirmed to have been killed in the recent crackdown on the Iran protests, the People’s Mojahedin Organization of Iran (PMOI or MEK) announced over the weekend. The group, also known as the Mujahedin-e-Khalq (MEK), released the names of 504 slain protesters.
The MEK said at least 400 protesters have been killed in Tehran Province, another 320 in Kermanshah, 270 in Fars, 240 in Khuzestan, 120 in Isfahan, and 100 in Alborz (Karaj).

Mrs. Maryam Rajavi, the President-elect of the National Council of Resistance of Iran (NCRI), said the regime still refuses to hand over the bodies of the martyrs and brazenly demands their families pay for the bullets with which it murdered their children. This shocking crime is undoubtedly one of the most horrific crimes of the 21st century and by any measure amounts to a manifest case of crimes against humanity, she noted, underscoring that the international community must banish the religious fascism ruling Iran.

The United Nations must immediately dispatch fact-finding missions to #Iran to investigate the scale of crimes against humanity and visit those arrested. And the world must recognize the Iranian people’s Resistance and uprising to overthrow the mullahs #IranProtests

Mrs. Rajavi called on the United Nations Security Council and the European Union to take urgent action to stop the crackdown in Iran and crime against humanity and secure the release of those arrested. She urged the UN to establish an international fact-finding mission to investigate this major crime and visit the regime’s prisons and the prisoners.