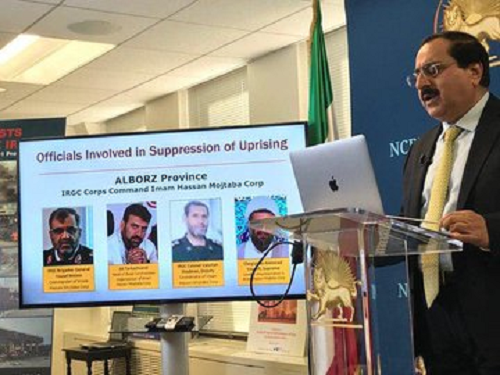 “This was a deep-rooted, widespread and very dangerous conspiracy,” Khamenei said, referring to the protests that broke out in more than 170 cities after the regime implemented a sudden hike on the price of gasoline. “They had spent a lot of money and they had put great effort to make this move at an opportune moment, to destroy and burn and kill and do wicked things. They thought that the issue of gasoline [price] will give them the opportunity and they brought their forces in the fields. And this movement was destroyed by the people.”

Like his representatives across the country, Khamenei tried to separate the protesters from the people.

But “people” as Khamenei referred to in his speech is nothing but the regime officials and security apparatus, and the remnants of its fast-shrinking base of support.
The figures of recent protests prove the deep resentment of the Iranian people of their tyrannical rulers. According to reports obtained from inside Iran, protests erupted in at least 170 cities. Security forces have killed more than 450 protesters, injured 4,000 others and arrested 10,000.

Nationwide uprising across 176 cities in all 31 provinces

The regime’s own authorities are acknowledging to the widespread scale of the protests. Iranian MP Mojtaba Zolnour told state-run TV that at one point, the regime’s security forces were involved in clashes in 800 locations across the country. Abdolreza Rahmani Fazli, the regime’s interior minister, revealed that a group of 500 protesters made a break to capture the regime’s state-run TV. Other regime officials likened the protests to “atomic bombs” and “world war.” Salar Abnoush, an IRGC commander, said the regime’s survival was only made possible through “a miracle.”

Such remarks, made by senior security officials, all prove that Iran’s uprising was a popular movement that belonged to all the people of Iran, who are fed up with the 40 years of tyranny and corruption of the mullahs.

So, why did Khamenei and his other officials try to describe the protesters as anything other than the outraged people of Iran? The reason is that Khamenei sees his regime on the brink of collapse, and is determined to keep it afloat at any cost, even if it requires the slaughtering of the people.
Iran’s state-run television quoted Khamenei as recommending the paramilitary Basij forces to “be present at all locations.” During the recent protests, IRGC and Basij forces opened fire on protesters, killing them in the streets and taking others to makeshift prisons, where they further tortured them.

In his remarks, Khamenei also clearly ordered his forces to suppress the people in the most violent way. In his recommendations to the Basij, he told them to draw experience from the 1980s, when the regime carried out the brutal killing of MEK members in the streets.

“Don’t be caught unawares. The experience of the Committees in the 1980s was very positive. Use that experience,” Khamenei said, referring to Islamic Revolutionary Committees, patrols that were tasked with identifying and arresting opposition members in every neighborhood. “During the 1980s, the Revolutionary Committees were present in every neighborhood, in every place. They were always present. Whenever an incident took place, everyone saw these brothers.”

The rearrangement of the security apparatus comes as the regime also gets ready to clamp down on internet communications and prevent any news of protests and the regime's brutality from reaching the world.