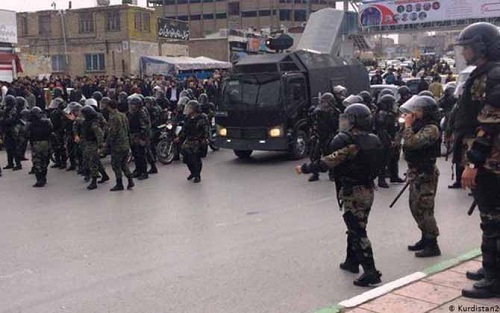 Rupert Colville, U.N. human rights spokesman, also called on authorities in Iran to restore the internet service cut off since Saturday and uphold the demonstrators’ rights to freedom of expression and peaceful assembly.

It had reports that the number killed was in the dozens, he told a Geneva briefing, adding that the extent of casualties was “clearly very serious”.
At least 200 protesters have been killed by security forces since the beginning of protests over a sharp hike in petrol price.

Due to the internet shut down by the Iranian regime, the number of videos and reports coming from Iran are limited but what is clear is that the regime has started a brutal crackdown against protesters.

Security forces have launched a crackdown with thousands of people arrested and the Internet shut down across most of the country.

The regime’s supreme leader Ali Khamenei personally weighed in Sunday November 17, and called the protesters, “hooligans,” giving a green light to the security forces for killing of protesters in Iran. He instructed “officials in charge of maintaining security” to “carry out their line of duties.”
Other officials have issued statements calling on security forces to use every mean to crush the protesters.