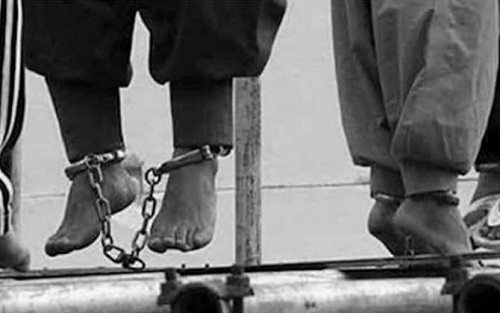 Eight inmates were collectively executed on August 28, in Raja’i Shahr Prison in the city of Karaj, near the capital, Tehran.

All of them were transferred to solitary confinement on August 26 to be prepared for execution.

In other news on Wednesday morning, Iranian authorities executed Hamidreza Derakhshandeh, a man who had killed Mohammad Khorsand, the regime’s notorious Friday Prayer Leader in Kazerun.

Authorities in the city of Babol in Mazandaran Province, northern Iran, also hanged a man in public during the early morning hours of Monday, August 26, the state media reported.

This horrific execution of a 25-year old man identified only as “H” was carried in the city’s Babolkenar Park.

On the same day Iranian regime authorities also executed a woman in Mashhad prison. This is the 94th woman executed during the tenure of Iranian regime President Hassan Rouhani.

The Iranian regime is the record holder of executions per capita. More than 3,800 people have been executed during the tenure of Iranian regime president Hassan Rouhani.

In a report to the General Assembly circulated in Augst 2019 the U.N. expert on human rights in Iran Javaid Rehman said “the number of executions remains one of the highest in the world.”

Rehman expressed concern that Iran has more than 80 offenses punishable by the death penalty, including adultery, homosexuality, drug possession, “waging war against God, corruption on Earth, blasphemy and insult of the Prophet” Muhammad. He said many of the offenses are not considered serious crimes under the International Covenant on Civil and Political Rights.

Iran deploys the death penalty as a tool for maintaining its grab on power and for silencing a disgruntled populace the majority of whom live under the poverty line, while unemployment is rampant in the country and there is no freedom of speech.