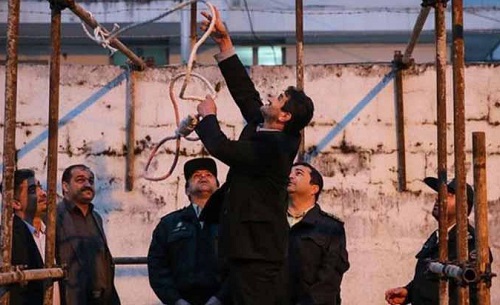 Three inmates were hanged in Gohardasht Prison in Karaj on Wednesday, 12 June, 2019. Two of the men have been identified as Amir Tahmaseb and Samad Basideh.

The prisoners were accused of rape which is punishable by death according to the Iranian regime’s punishment laws. These executions have not been announced by the regime’s state media, yet.

Also on Wednesday, 12 June, the head of the Justice Department of Ardabil, Nasser Atabati, announced that they had executed an inmate in the Prison of Ardabil. He said the convict was a smuggler of antiques accused of killing two State Security Force officers and two civilians in a shoot-out with the police, for which he was sentenced to Qesas or retribution in kind. (The state-run Mizan Online – 12 June, 2019)

On Sunday, 9 June, 2019, Hashem Amiri, married with three children, was hanged in the Prison of Gorgan, capital of the Northern Province of Golestan. The execution has not been announced by the regime’s media.

In the past four decades, Iran has gone through numerous social crises perpetrated by the regime either deliberately or due to its mismanagement. These social crises are the source of many crimes. Rather than curing the social problems and healing the wounds, the regime’s response to these crimes has been inhumane punishments.

The death penalty has served as a tool for the Iranian regime to hold its grab on power. The Iranian regime uses executions to silence a disgruntled public the majority of whom live under the poverty line, are unemployed and deprived of freedom of expression.

Iran Human Rights Monitor calls on the UN Human Rights Council and the UN Security Council to send a delegation to visit Iranian prisons and inspect the conditions of prisoners and particularly political prisoners who are being persecuted for exercising their freedom of speech.