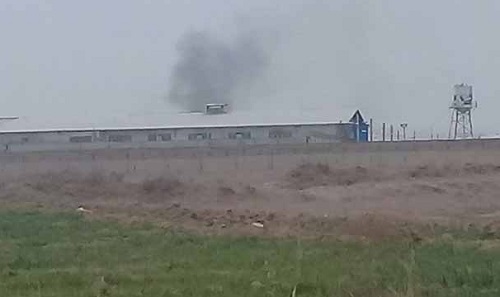 Iranian prison guards in riot gear beat prisoners and used tear gas, firearms and pepper spray during raids inside the Qarchak women’s prison, east of Tehran, family members of the prisoners held at the facility reported.

According to the family members of one of the prisoners, the attack has continued today with anti-riot units beating female prisoners. During the attack several inmates have been beaten and injured.

Reports published on social media indicate that after the female prisoners in wards 1 and 2 tried to raise awareness that one of them needed medical care.

Prisoners set fire to their beds and bed sheets in order to neutralize the effects of the paper spray and tear gas fired in the closed area.
Qarchak prison authorities used a fire engine to extinguish the fire while women were still trapped in their ward.

Female prisoners have reported that smoke has covered the prison and the forces are still beating women.

The prison authorities have removed the benches and exercise equipment from ward one so the women wouldn’t be able to use them to defend themselves.

Responding to reports of the attack that began last night, Amnesty International’s Research and Advocacy Director for the Middle East and North Africa, Philip Luther, said:

“The reports of the Iranian prison guards’ reckless and heavy-handed response to protests at Shahr-e-Rey prison are deeply alarming.
Many prisoners were reported to have received hospital treatment for the effects of tear gas.

“Prison authorities must refrain from using unnecessary and excessive force against prisoners. Instead of carrying out violent raids against prisoners, they should be working to address the inhumane and squalid conditions at Shahr-e Rey prison.”

Eyewitnesses describe the situation in this facility as “the end of the world”.

A large number of women have been detained in a small area with horrible hygienic conditions. Shortage of beds forces women to sleep like sardines on the floor.

The prison has only four showers for some 200 inmates. The water is salty and has caused numerous skin diseases and other health complications for the detainees.

Prisoners are not given proper food or medicines. The absence of medical care for the sick, causes dangerous epidemics in prison and given rise to high number of prisoners contracting Hepatitis and AIDs.

With any slight objection to the condition of food or other problems, the prisoner will end up in “solitary” confinement in the company of dangerous common criminals. This threat has proved to be effective in silencing the prisoners.