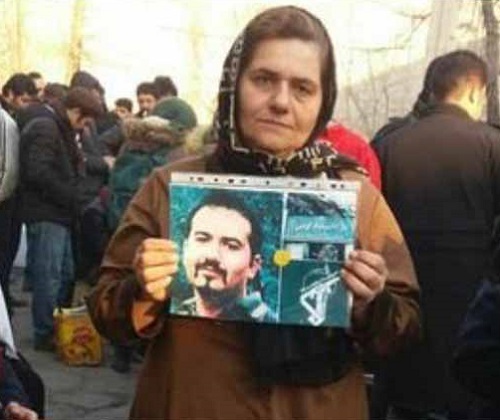 With the public outcry over torture in Iran’s detention centres, Farangis Mazloumi mother of political prisoner Soheil Arabi recounts her experience of daily torture saying she is being tortured every day and every night.

Farangis Mazloumi described her visit with her son, political prisoner, Soheil Arabi on January 16, 2019, as follows:
“Soheil was even weaker and slimmer than before. Bleeding and nasal pain tormented him and toothache and cold were added. There is still no sign of a doctor and hospital.

The medical file for the breaking of his nose has been completely destroyed so that there would be no evidence of it, but it is obvious from his appearance.

Every Wednesday I’m tortured, too, and I am even tortured throughout the week. We’re deprived of phone calls, until the visiting day, which every time I go with fright, fearing that visits will be banned once again.

I am tortured every day and every night. Will I be alive for 11 more years? How can I bear this suffering? Can my heart endure all this torture? Is the life and youth of our children so worthless? Every time I went to court, they gave me an uppity answer. Even Mr. Rostami and Vaziri are not willing to see me either. So who am I supposed to seek my justice from? Who will answer my plea from all this oppression?”

Iranian labour activist Esmail Bakhshi’s letter concerning torture, persecution, and maltreatment at the country’s prisons, provoked a wave of revelations about torture committed against political prisoners and prisoners of conscience.

Under the Farsi hashtag “I was also tortured, too” many activists joined the tortured union leader in exposing abuse in prisons.
Political prisoner Sohail Arabi, held in the Greater Tehran Prison, joined the campaign describing how he has been suffering from intense bleeding due to a broken nose, yet the authorities are refusing to allow him to seek medical treatment.

For months, Arabi has been deprived from any medical care or surgery, literally placing him under torturefor several months now.

It is worth noting that Haj Moradi, warden of the Greater Tehran Prison, issued orders back in June of last year to have political prisoner Sohail Arabi transferred to ward 2A of the notorious Evin Prison in the country’s capital, Tehran. This ward is under the direct control of the Revolutionary Guards (IRGC) and Arabi was placed under constant interrogation.

The interrogators placed this political prisoner under torture and he suffered a broken nose that he has been forced to bear ever since. Arabi was initially taken to the Khomeini Hospital only to be returned to the Greater Tehran Prison without being allowed to undergo surgery.