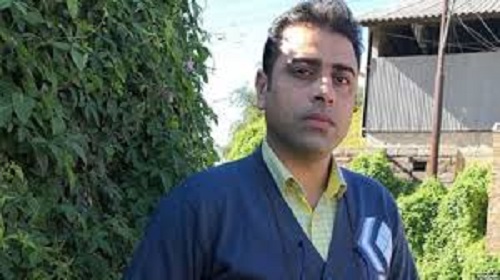 Bakhsi who is a labour leader at Haft Tapeh Sugar Cane complex workers in Shush, in the oil-rich province of Khuzestan, southwest Iran, was arrested on November 20, 2018, during demonstrations by workers demanding unpaid wages.

After his release on December 12, from his first detention, Bakhshi revealed in a letter posted on his Instagram account, that he had been tortured during his 25-day detention by agents of the intelligence ministry.

In the same letter, Bakhshi challenged the intelligence minister calling him to a TV debate on agents’ behavior.

“I was beaten up and tortured to death for no reason,” Bakhshi said. “I was so badly battered that I could not move for 72 hours in my solitary confinement cell. The pain was so unbearable that it made sleeping impossible,” Bakhshi wrote on his Instagram account.

“Weeks after my release, I still feel intolerable pain in my broken ribs, left ear, and testicles,” he added.

The labour activist also said he and journalist and civil rights activist Sepideh Qolian were bombarded with abusive sexual language.

“The torturers, who presented themselves as the unknown soldiers of [the Shi’ite] Hidden Imam (the title exclusively used for the agents and moles hired by the Intelligence Ministry), used to shower us with vituperative sexual terms while beating us up.”

Judiciary spokesman Gholamhossein Mohseni Ejei, said the Justice Department would look into Bakhshi’s allegations if he files a complaint.

But since then there has been no progress in the investigation and it seems officials are backtracking.

On 9 January, Zilabi said the authorities had threatened that if Bakhshi refused to withdraw his torture allegations they would air clips of Bakhshi’s so-called “confessions” on the national state broadcaster.

Defamation of the activist

Days later on January 10, 2019, Hossein Shariatmadari, the hardliner conservative editor-in-chief of Kayhan newspaper, wove his own conspiracy theory, accusing Bakhshi of collaborating with Komala, a militant Kurdish organization, and demanded he be punished for “slandering courageous Intelligence Ministry agents.”

“Don’t you see they made up this whole thing to validate the European Union’s decision to impose sanctions on the Intelligence Ministry? I hope we are not going to be sucked into the enemy’s trap any further and will not give foreign enemies and their internal lackeys any more opportunities to poison the air,” he wrote.

On January 14, Prosecutor General Montazeri announced the “investigation” had concluded there was no torture, adding “I would like to inform the people that the news reports about this matter were basically lies and there were no beatings or injuries or torture and the person who made the claims about being tortured had his own particular political motives.” He added: “This individual was not just an ordinary worker. He had ties to certain quarters and it appears that he made these torture claims to cover up his own crimes.”

The Haft Tapeh protests ended in late December, with the workers being paid and the factory re-opening.

In November, the head of Iran’s judiciary warned restive workers against creating “disorder”.

Mizan Online quoted Ayatollah Sadegh Larijani saying: “workers should not allow their demands to become an excuse and an instrument for the enemy.”