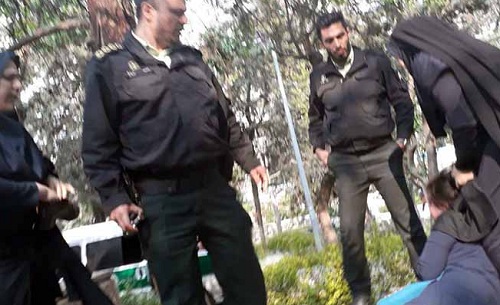 Violence against women and girls (VAWG) is one of the most widespread, persistent and devastating human rights violations in our world today remains largely unreported due to the impunity, silence, stigma and shame surrounding it.

Iranian women are being subjected to serious and sometimes fatal domestic violence at alarming rates without any effective means of protection and the regime takes no effective action despite its obligations under international law to do so.

The prevalence of violence against women in Iran calls for the international community’s measure to hold the Iranian regime accountable for violating its international obligations to uphold women’s rights.
Iran’s laws and Constitution not only lack the necessary protections against violence toward women but institutionalize violence against women and sanction the cruel punishments of flogging, stoning and blinding.
Official acknowledgements over the past year attest to a drastic rise in violence against women in Iran. Regime experts have confessed that under the mullahs’ rule, “Iran has one of the highest statistics on violence against women.” (The state-run ILNA news agency, September 18, 2018)
While admitting that the latest research done on violence against women in Iran was done 14 years ago, regime’s experts have revealed that 66% of Iranian women have experienced violence in their lifetime. (The state-run ISNA news agency, November 16, 2018) Although, this is double the world average but it is clearly an understatement of the reality of women’s life in Iran.
A member of the mullahs’ parliament asserted that “currently domestic violence against women is pervasive in society.” (The official IRNA news agency – 25 November, 2017)
However, the regime has hampered the adoption of the bill on prevention of violence against women. The Judiciary has not only omitted about half of the articles of this bill, but it has held up the bill for 8 years and has not passed it to the parliament for adoption.
The most common form of violence inflicted against women in Iran is the state-sponsored measures to impose the compulsory veil. Dozens of video clips were posted on the social media over the past year, revealing the savagery of the so-called guidance patrols in dealing with Iranian women on the streets and parks.
A report published in summer by the research centre of the regime’s parliament indicated that some 70% of Iranian women do not believe in the compulsory dress-code, namely the head-to-toe black veil or Chador, imposed by the regime. They are among the “improperly veiled” and protest the compulsory veil.
The report confirms that Iranian women observe the veil only through coercion and harsh restrictions.
As the centre puts it, more than 85% of the “improperly veiled” do not believe in the value of Chador and do not approve of government intervention to control this issue. The research indicated that young educated women residing in large cities and metropolises, have the strongest resistance against the compulsory veil.
Another common form of violence against women in Iran are the forced early marriages widely practiced across the country. It has been officially acknowledged that some 180,000 girl children in Iran are forced to get married every year. The regime’s social experts have also noted registration of hundreds of marriages of girls under 10.
According to the official statistics, there are some 24,000 widows under 18 years of age in Iran, and most of the early marriages end up in divorce.
Shahrbanou Imami, member of Tehran’s City Council and former member of the mullahs’ parliament, told an IWD gathering at Tehran’s Melli University that there were 15,000 young widows under 15 years of age in Iran.
The regime’s parliament has not passed the bill proposing to eliminate violence against women.
The only effort made was an attempt to urgently pass a bill banning marriage of girls under 13 years of age, which has not been decided upon, yet.
Institutionalized in the clerical regime’s laws, early marriages of girls under 18 are also considered obvious examples of child abuse by international standards.
The legal age of marriage for girls in Iran is 13 years old, and girls can be given to marriage even in younger age if the father and a judge decide that they are mature enough.
Iran is one of six countries in the world which has not yet ratified the Convention on the Elimination of Discrimination against Women (CEDAW). Nevertheless, Iran’s commitments under other international conventions require the government to take clear steps to prevent violence against women.
In a statement released on 23 November, the NCRI Women’s Committee has called for action by the international community to hold the Iranian regime accountable for its state-sponsored and institutionalized violence against women in Iran.

“The state-sponsored and institutionalized nature of violence against women in Iran calls for action by the international community to hold the Iranian regime accountable for violating its obligations to uphold women’s rights and alleviate the suffering of Iranian women” the statement reads in part.