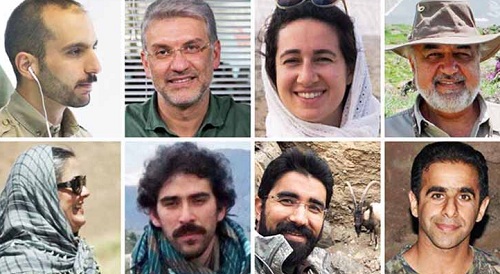 Five out of the eight Iranian environmentalists who were arrested in January 2018, have been issued preliminary indictments.

Those who have not yet been charged are Amir Hossein Khaleghi, Abdolreza Kouhpayeh and Sam Rajabi.

In an interview with the state-run ISNA news agencyو the lawyer of a number of the detained environmentalists Hossein Aghasi said that although his clients were initially charged with espionage, Tehran’s Prosecutor changed the charges to “corruption on earth.”

The environmentalists were arrested on 24 and 25 January, 2018, by the Islamic Revolutionary Guard Corps’ (IRGC) Intelligence Organization.

They have not been given access to lawyers of their choice or have had a trial date set. Family members said on social media late in September that they were told by judicial authorities that the detained environmentalists can only be represented by lawyers from a pre-approved list of 20 that the judiciary had published in June.

Detainees charged with various offenses, including national or international security crimes, political, and media crimes, are subject to Article 48 of Iran’s 2014 criminal procedure law, which says that they must select their counsel from a pre-approved pool selected by Iran’s judiciary during the investigation.

The list of lawyers allowed representing people charged with national security crimes in Tehran province was published in June, and does not include any women or human rights lawyers.