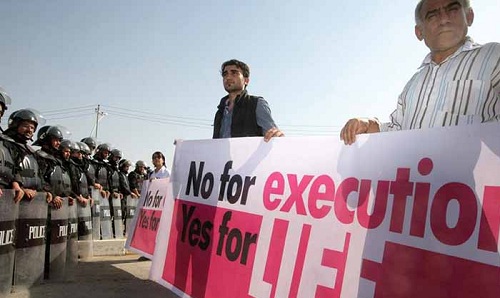 While 160 countries across the world have either abolished the Death Penalty or at least called a moratorium on its use, the clerical regime ruling Iran remains among the world’s most brutal.

The Iranian regime executes more people per capita than any other country. The total number of executions carried out in Iran stands only next to China, whose population is over 17 folds greater. According to Amnesty International, Iran accounts for over half of executions world over.

Tehran sanctions capital punishment for political dissidents as well as ethnic and religious minorities. Juvenile offenders and women are not excluded.
Iran Human Rights Monitor recorded at least 3,602 death sentences carried out during Rouhani’s tenure. This includes the executions of 34 juvenile offenders, 84 women and 86 political prisoners.

Since January 2018, at least 223 people have been executed. The executions of at least nine political prisoners and six individuals who were under 18 at the time of the crime have been confirmed. 35 executions were carried out in public. The actual numbers are likely to be much higher as most executions are carried out secretly.

The death penalty is not only a means for punishment in Iran, but a tool for preserving the rule of those in power in the face of an increasingly furious populace.