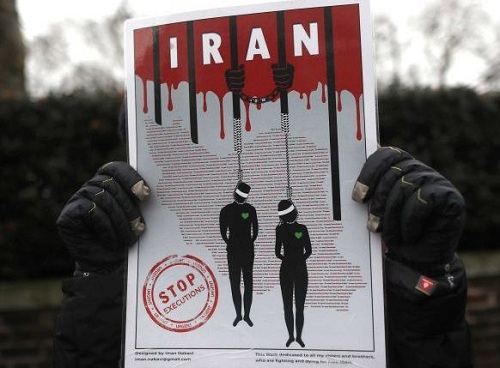 On the eve of October 10 which marks the World Day against the Death Penalty, a number of death row prisoners all over Iran announced the following statement:

– While 176 prisoners were executed during the first half of 2018

– While the Iranian regime has executed prisoners despite repeated international calls, including three Kurd political prisoners, Ramin Hossein Panahai, Zaniar Moradi and Loghman Moradi, to intimidate the public in fear of the spread of protests and the anger and frustration of the people- While the UN High Commissioner for Human Rights, Ms. Michelle Bachelet condemned the execution of juveniles

– While Iranian truckers have been on strike since September 23 which has spread to more than 310 cities; While the government has threatened truck drivers to death and has arrested 250 truck drivers

– While we are among the thousands of prisoners across Iran awaiting our death and like Zaniar Moradi wrote before his death: “Nine years have passed. Nine years in which I languished in prison while being sentenced to the inhumane death sentence. During these long years… I dreamed of being hanged by the noose. I’ve spent these nine years thinking about the gallows and the noose and that they will hang around my neck… Every time a young person was hanged in this country, I felt as though it was my turn to be hanged.”

Therefore, as a number of prisoners in various prisons in Iran who have been sentenced to death:

– We urge all international human rights organizations, especially the High Commissioner for Human Rights and the Special Rapporteur on the situation of human rights in Iran, journalists and the media, to condemn these executions and take immediate action to stop these medieval crimes being carried out in the twenty-first century.

– We request that the 40 years of execution, public execution and systematic killings be stopped in Iran.

Currently executions have turned into an instrument in the hands of the authoritarian rulers of Iran to consolidate their rule and suppress the people. We consider the execution of prisoners as systematic killings carried out by the government. The gallows are not the solution to the Iranian people’s problems.

As prisoners who have faced death and execution throughout these years, we call on the families of all death row prisoners, political prisoners and all political and human rights activists to unify and become the voice for the annulment of the death sentence and to aid the people of Iranian in countering this historical calamity.

A group of death row prisoners in Iran