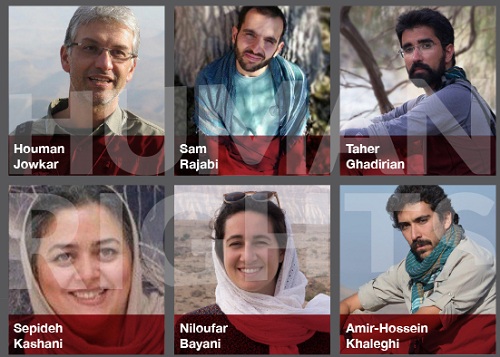 Seven environmentalists who were arrested in Tehran nearly six months ago are still kept in detention with no or extremely limited access to legal services while their families are concern about their fate and condition and have no information regarding the charges against them.

These detainees have been accused of spying on Iran’s missile sites, under the pretense of environmental activities, but, here is no evidence to support this allegation.

In this regard, the chief of Iran’s Department of Environment, Isa Kalantari, has told Iranian Official Media that the judiciary has warned him to stop asking about environmentalists who have been detained for the past six months.

In an interview with Jomhori Islami News Agency, Isa Kalantari said: “The judiciary has ordered us not to get involved”, on 13 August, 2018.
He continued: “They told us this is none of our business and we shouldn’t pursue it.”

Kalantari added: “The esteemed intelligence minister has repeatedly said there is no evidence that the detainees had spied and yet the judiciary has still not resolved their situation. Almost all of our NGOs are at a standstill because they don’t know to what extent they can operate without being accused of spying.”